London, 4th December 2017 – World Duty Free, a Dufry company, in collaboration with Disney and Lucasfilm, is delighted to have won ‘Brand Partnership of the Year’ at the Screen Awards this week. 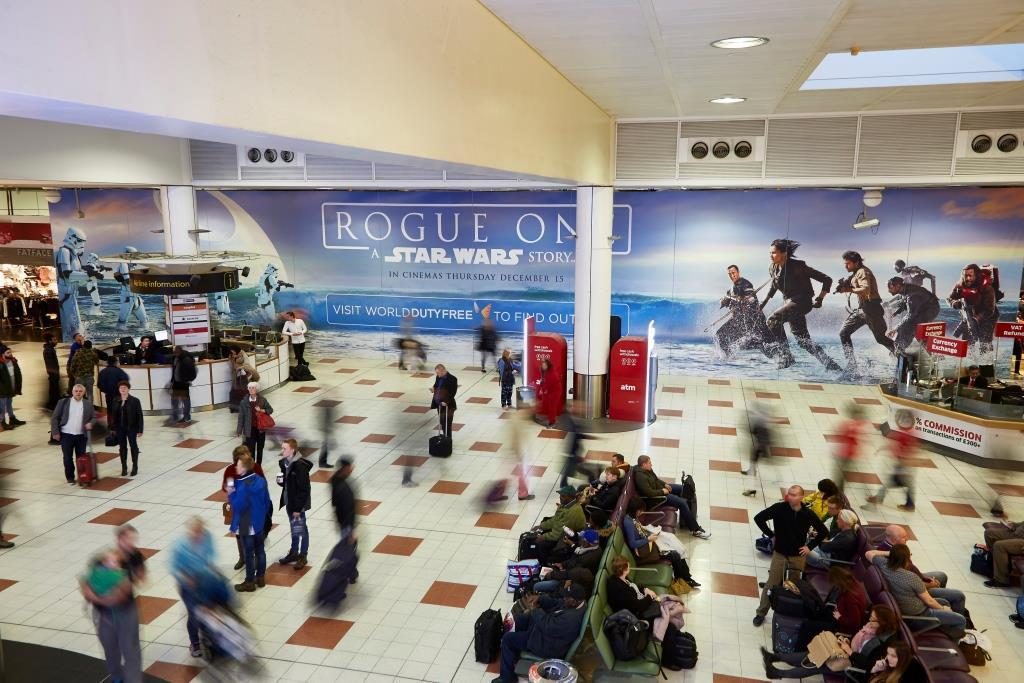 The award was presented for the Rogue One: A Star Wars Story campaign which took place at London Gatwick’s North and South terminals from September through to December 2016.

In this exclusive campaign, the ‘trinity’ collaboration delivered a unique Star Wars experience to travellers, raising the bar in travel retailing to surprise and delight airport passengers. The campaign aimed to drive high levels of customer engagement, with innovative and imaginative activations on airport and through social media.

Characters from the film including storm troopers and Death Troopers appeared in store and interacted with customers. Walkways from the main car parks featured floor to ceiling graphics from the film and once airside in Gatwick South, passengers discovered and interacted with the costumes of the five main characters. As well as the opportunity to be fully immersed in the world of Rogue One: A Star Wars Story through a virtual reality (VR) experience, Rogue One: A Star Wars Story actor Warwick Davies also hosted a personal takeover of World Duty Free’s Twitter platform.

This prestigious award reflects the extent to which World Duty Free, who worked closely with London Gatwick Airport, succeeded in creating a world class experiential marketing campaign. Commenting on the award submission, the judging panel noted that the campaign was “innovative and ground-breaking, delivered on a grand scale with great theatre for customers”. They particularly liked the involvement of the film characters and felt that the campaign appealed to all age groups and families in particular.

Speaking about the company’s success Eugenio Andrades, Divisional CEO at Dufry for UK, Central and Eastern Europe said “With the Rogue One: A Star Wars Story campaign, customers found themselves immersed in the world of ‘Rogue One’ at all touch points of their journey, from car park through to departure lounge. When they entered our World Duty Free store in Gatwick South, they were able to experience the film for themselves – before it was even released in cinemas – using the virtual reality technology installed in our expo space. I personally would like to thank Disney and Lucasfilm for their trust in us to bring such an important franchise as Star Wars to our airport environment and to the Gatwick team for a fantastic partnership before and through the execution. All this would not have been possible without the passion of all teams involved”.

Rachel Bulford, Head of Retail at Gatwick Airport continues, “The unique ‘Rogue One’ campaign brought a touch of Hollywood to the Gatwick terminal last winter. Passengers of all ages relished the out of this world pre-flight experience that the campaign provided. We enjoyed working closely with World Duty Free and our media agency Primesight to bring such a fantastic initiative to Gatwick, and welcome the news that the Screen Awards has recognised it as the leading brand partnership of the year.”

We use cookies on our website to give you the most relevant experience by remembering your preferences and repeat visits. By clicking “Accept All”, you consent to the use of ALL the cookies. However, you may visit "Cookie Settings" to provide a controlled consent.
Cookie SettingsAccept All
Manage consent